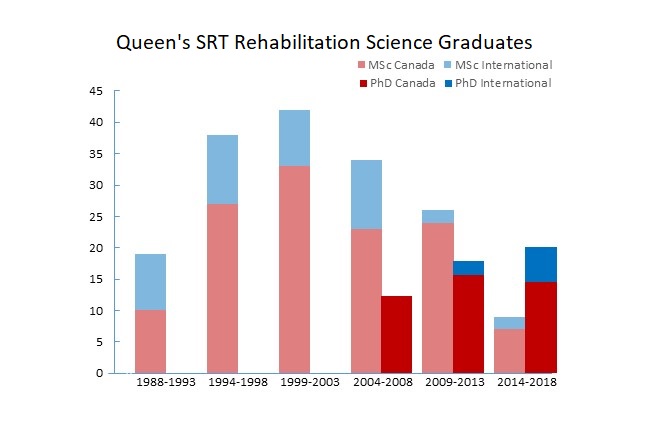 During the early 2000's, the entry-to-practice standard for occupational therapy and physical therapy in Canada started to shift, and the Queen's programs were no exception. In 2003, the School admitted its last cohorts of BScOT and BScPT students, and in 2004 it admitted its first cohorts of entry-to-practice MScOT and MScPT students, all graduating in 2006. Through this period, the admission rates in the Rehabilitation Science program started to shift, from predominantly master's students, to about equal numbers of master's and doctoral students. By the next decade – the 2010s – the Rehabilitation Science typically admitted more doctoral students than master's students, and it continues to do so. In 2014 and every year thereafter, there have been more doctoral degrees awarded than master's degrees.

By the numbers: In 30 years, Queen's has awarded 213 Rehabilitation Science degrees to 202 people (11 of the MSc graduates went on to do PhD degrees as well). That is an average of about 7 graduates per year, with annual numbers as low as 1 in 1991 (the first ever graduate) and as high as 18 in 2008. There have been 168 MSc degrees and 45 PhD degrees awarded. In light of the long history of international projects by faculty members in the School, it is unsurprising that the Rehabilitation Science program has an equally long history of attracting international students. Among the 168 MSc graduates, 44 (26%) held citizenship in a country other than Canada; the corresponding number for PhD graduates was 7 (16%) of 45. Although the percentages classified as international for funding purposes were lower than the above numbers because many students held permanent resident status in Canada, the numbers still reflect a high extent of international diversity in the Rehabilitation Science program. There were 16 countries represented, from all continents in the world, with the greatest representation from Brazil (n = 10), China (n = 9), and India (n = 8).

As I reflect on our current student body, I see the traditions and trends continue. We will see at least as many doctoral as master's degrees awarded in 2019. Queen's is retaining its international diversity and expanding the range of countries from which its rehabilitation science students are drawn. The mix of students' backgrounds continues to be diverse. When Canadian-educated occupational therapists and physical therapists enter the program, they now typically do so at the doctoral level. However, many internationally-educated therapists have a baccalaureate entry-level degree, and may enter the master's or doctoral program, depending on any other education they have. Moreover, the program still attracts one-third to one-half of its students from disciplines other than OT and PT, both within and outside classical health fields, but all with an interest in advancing knowledge, inspiring practice and transforming people's lives in relation to disability and rehabilitation.