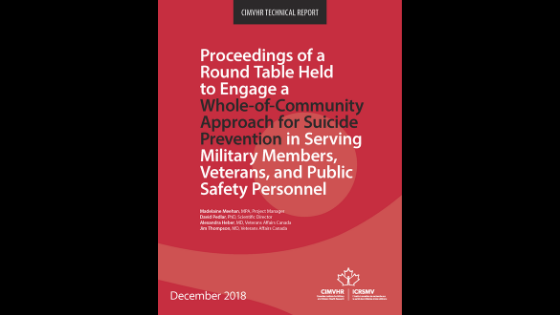 The Canadian Institute for Military and Veteran Health Research (CIMVHR) is a university centre based within the School of Rehabilitation Therapy at Queen’s University. The only pan-national institute within the military, Veteran, and family health research international landscape, CIMVHR is a network of 43 Canadian academic members and 10 global affiliates, serving as the hub for research, relationships, and impact within the academic military, Veteran, and family health research community. CIMVHR is actively engaged in knowledge translation, which encompasses working with partners to ensure high quality research findings are synthesized, disseminated, and exchanged in a timely and impactful manner.

As an arms-length organization, CIMVHR is ideally placed to assist in engaging the whole community in evidence-based suicide prevention for military personnel, Veterans, and public safety personnel. CIMVHR’s work in this area includes working with government partners, such as Veterans Affairs Canada and the Canadian Armed Forces, to support the implementation of a suicide prevention strategy for Veterans.

Suicide is a major tragedy that touches many in the military and Veteran communities. Work on suicide is relevant to the School of Rehabilitation Therapy practice because well-being issues, such as musculoskeletal injury and chronic pain, play a role in mental health and suicidality. Scientific studies over the past decade have found that Canadian Veterans are at greater risk of suicide than the general population. For the purposes of this discussion, a Veteran is any Canadian who formally served in the Canadian Armed Forces. While there have been advances in suicide prevention, one of the challenges is developing whole-of-community engagement, meaning finding opportunities for all elements of the public and private sectors, communities, Veterans, and families to participate.

In May 2018, CIMVHR hosted a round table in Ottawa to begin the process of bringing together academia, military personnel, Veterans, public safety personnel, their families, and the public and private sector organizations. The event was planned as a pilot, since there was no precedent in the above Canadian military, Veteran, and public safety personnel communities for the complex process of whole-of-community engagement in suicide prevention.

The workshop included an opportunity for rich round table discussions to take place. Outcomes of the discussions were condensed into seven themes, which outline opportunities and challenges for developing whole-of-community engagement in suicide prevention. Workshop participants highlighted the need for more information in key areas, including finding ways to turn research findings into actions through whole-of-community knowledge sharing. Further detail on the outcomes of the round table can be found in the published report: https://cimvhr-cloud.ca/reports/suicidePrevention-report-2018.pdf.  In consultation with partners, a follow-up activity to take next steps in implementing a whole-of-community approach to suicide prevention will be undertaken in Spring 2019.