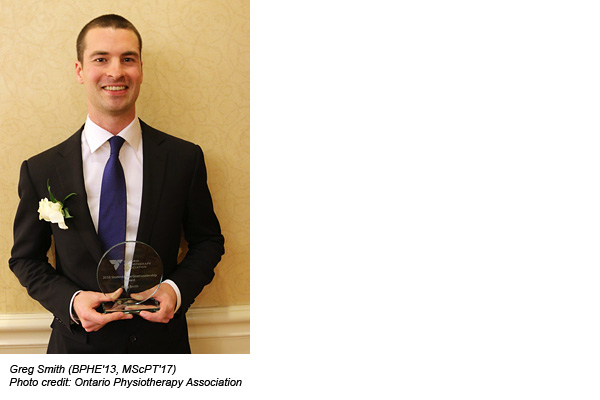 And The Award Goes To…..

On April 14, 2018, the Ontario Physiotherapy Association (OPA) bestowed its annual award for Student / New Grad Leadership to Greg Smith (BPHE'13, MScPT'17). His nomination team for this award included two of Greg's classmates and three of the faculty members who teach in the Queen's Physical Therapy (PT) program. The pool of people who could be nominated for this award each year numbers about 500 people, including all final year PT students and all PTs in the first year of practice across Ontario who are members of the Association. And because leadership is a trait among students that most PT programs seek as an admission criterion, to be a winner of this award, a person has to be an outstanding leader among leaders!

Greg showed impressive leadership throughout his time as a student at Queen's. In his two years in the MScPT program, he was one of his class's Professional Practice representatives, leading local events associated with the annual Physiotherapy Day of Service, and fundraising for the Physiotherapy Foundation of Canada. His representative role also led him to be active in the National Student Assembly (NSA) of the Canadian Physiotherapy Association (CPA). Greg became the NSA's Head of Information Technology / Communications in his second year, while also becoming a Student Representative on the executive of the CPA's Private Practice Division.

Now in his first year in practice as a physiotherapist, Greg continues in leadership roles. Among other roles, he served on a working group leading up to, and attending, the November 2017 CPA Leadership Forum, and he is a New to Practice Community Ambassador for the OPA. In the OPA news magazine, Greg wrote about his experience attending the CPA Leadership Forum:

I took away from experience that good leadership needs to be informed by diverse perspectives – whether that's diversity of ethnicity, gender, practice setting, ability, experience, language, geography or any other relevant characteristic.

Greg's insight about leadership and willingness to contribute to leadership will doubtless serve the profession well!

On behalf of the Queen's PT community as well as the Ontario Physiotherapy Association, congratulations to Greg. We look forward to seeing the future he will help build for the profession of physiotherapists.